At the highest level, a Pulsar instance is composed of one or more Pulsar clusters. Clusters within an instance can replicate data amongst themselves.

In a Pulsar cluster:

The diagram below illustrates a Pulsar cluster: 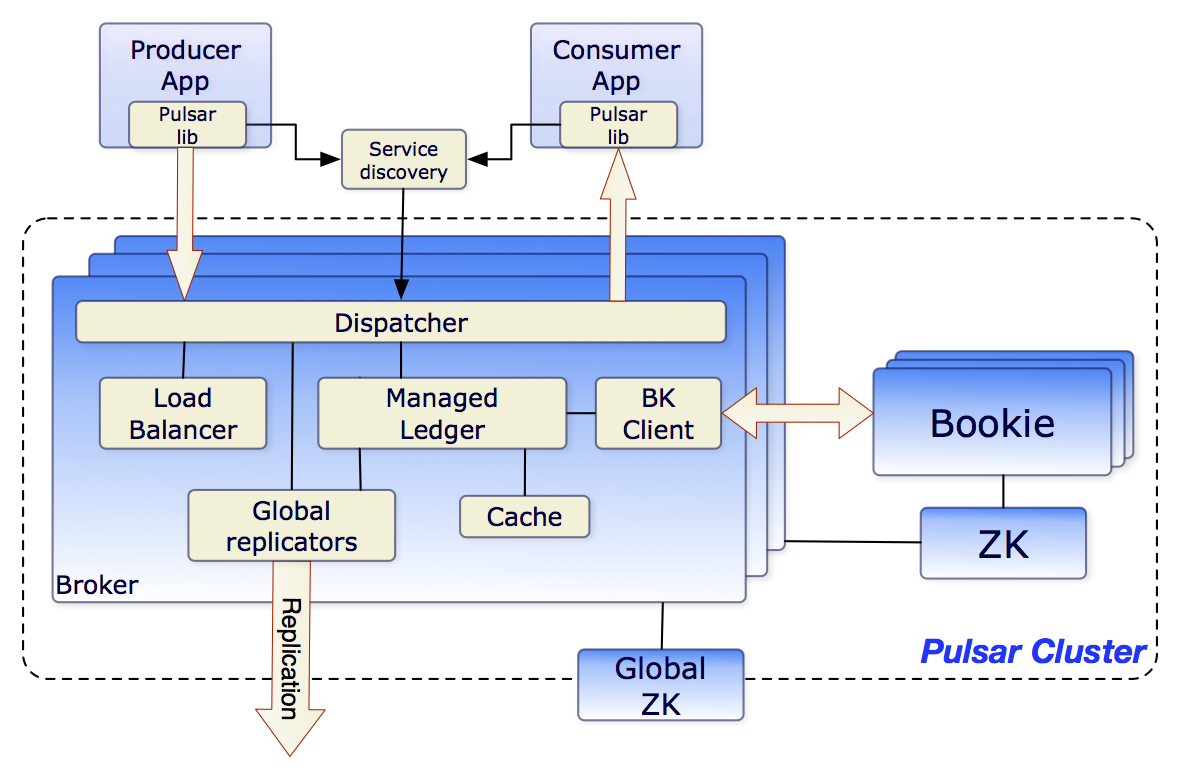 The Pulsar message broker is a stateless component that's primarily responsible for running two other components:

Messages are typically dispatched out of a managed ledger cache for the sake of performance, unless the backlog exceeds the cache size. If the backlog grows too large for the cache, the broker will start reading entries from BookKeeper.

Finally, to support geo-replication on global topics, the broker manages replicators that tail the entries published in the local region and republish them to the remote region using the Pulsar Java client library.

For a guide to managing Pulsar brokers, see the brokers guide.

A Pulsar instance consists of one or more Pulsar clusters. Clusters, in turn, consist of:

Clusters can replicate among themselves using geo-replication.

For a guide to managing Pulsar clusters, see the clusters guide.

In a Pulsar instance:

Pulsar provides guaranteed message delivery for applications. If a message successfully reaches a Pulsar broker, it will be delivered to its intended target.

This guarantee requires that non-acknowledged messages are stored durably until they can be delivered to and acknowledged by consumers. This mode of messaging is commonly called persistent messaging. In Pulsar, N copies of all messages are stored and synced on disk, for example, 4 copies across two servers with mirrored RAID volumes on each server.

In addition to message data, cursors are also persistently stored in BookKeeper. Cursors are subscription positions for consumers. BookKeeper enables Pulsar to store consumer position in a scalable fashion.

At the moment, Pulsar supports persistent message storage. This accounts for the persistent in all topic names. Here's an example:

You can see an illustration of how brokers and bookies interact in the diagram below: 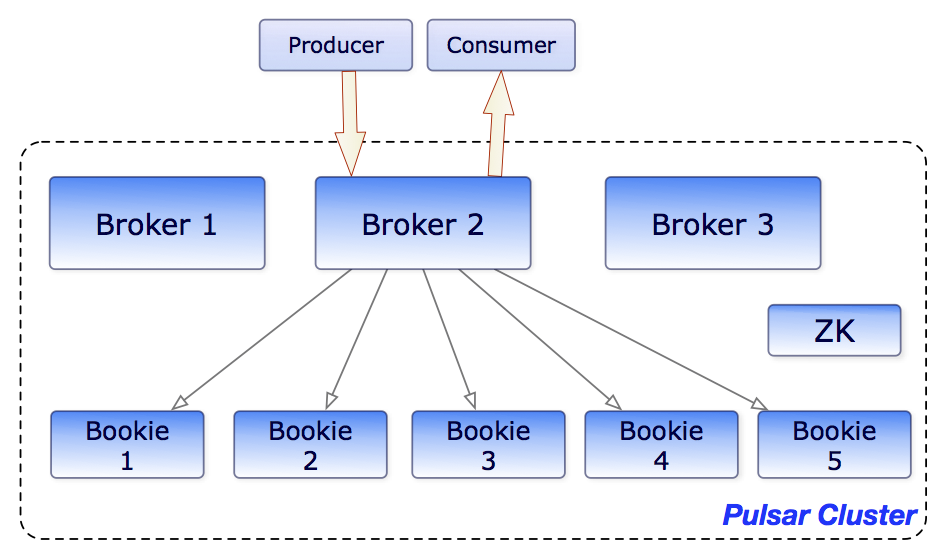 The main strength of Bookkeeper is that it guarantees read consistency in ledgers in the presence of failures. Since the ledger can only be written to by a single process, that process is free to append entries very efficiently, without need to obtain consensus. After a failure, the ledger will go through a recovery process that will finalize the state of the ledger and establish which entry was last committed to the log. After that point, all readers of the ledger are guaranteed to see the exact same content.

Given that Bookkeeper ledgers provide a single log abstraction, a library was developed on top of the ledger called the managed ledger that represents the storage layer for a single topic. A managed ledger represents the abstraction of a stream of messages with a single writer that keeps appending at the end of the stream and multiple cursors that are consuming the stream, each with its own associated position.

Internally, a single managed ledger uses multiple BookKeeper ledgers to store the data. There are two reasons to have multiple ledgers:

One way for Pulsar clients to interact with a Pulsar cluster is by connecting to Pulsar message brokers directly. In some cases, however, this kind of direct connection is either infeasible or undesirable because the client doesn't have direct access to broker addresses. If you're running Pulsar in a cloud environment or on Kubernetes or an analogous platform, for example, then direct client connections to brokers are likely not possible.

The Pulsar proxy provides a solution to this problem by acting as a single gateway for all of the brokers in a cluster. If you run the Pulsar proxy (which, again, is optional), all client connections with the Pulsar cluster will flow through the proxy rather than communicating with brokers.

For the sake of performance and fault tolerance, you can run as many instances of the Pulsar proxy as you'd like.

Architecturally, the Pulsar proxy gets all the information it requires from ZooKeeper. When starting the proxy on a machine, you only need to provide metadata store connection strings for the cluster-specific and instance-wide configuration store clusters. Here's an example:

Some important things to know about the Pulsar proxy:

Clients connecting to Pulsar brokers need to be able to communicate with an entire Pulsar instance using a single URL.

You can use your own service discovery system if you'd like. If you use your own system, there is just one requirement: when a client performs an HTTP request to an endpoint, such as http://pulsar.us-west.example.com:8080, the client needs to be redirected to some active broker in the desired cluster, whether via DNS, an HTTP or IP redirect, or some other means. 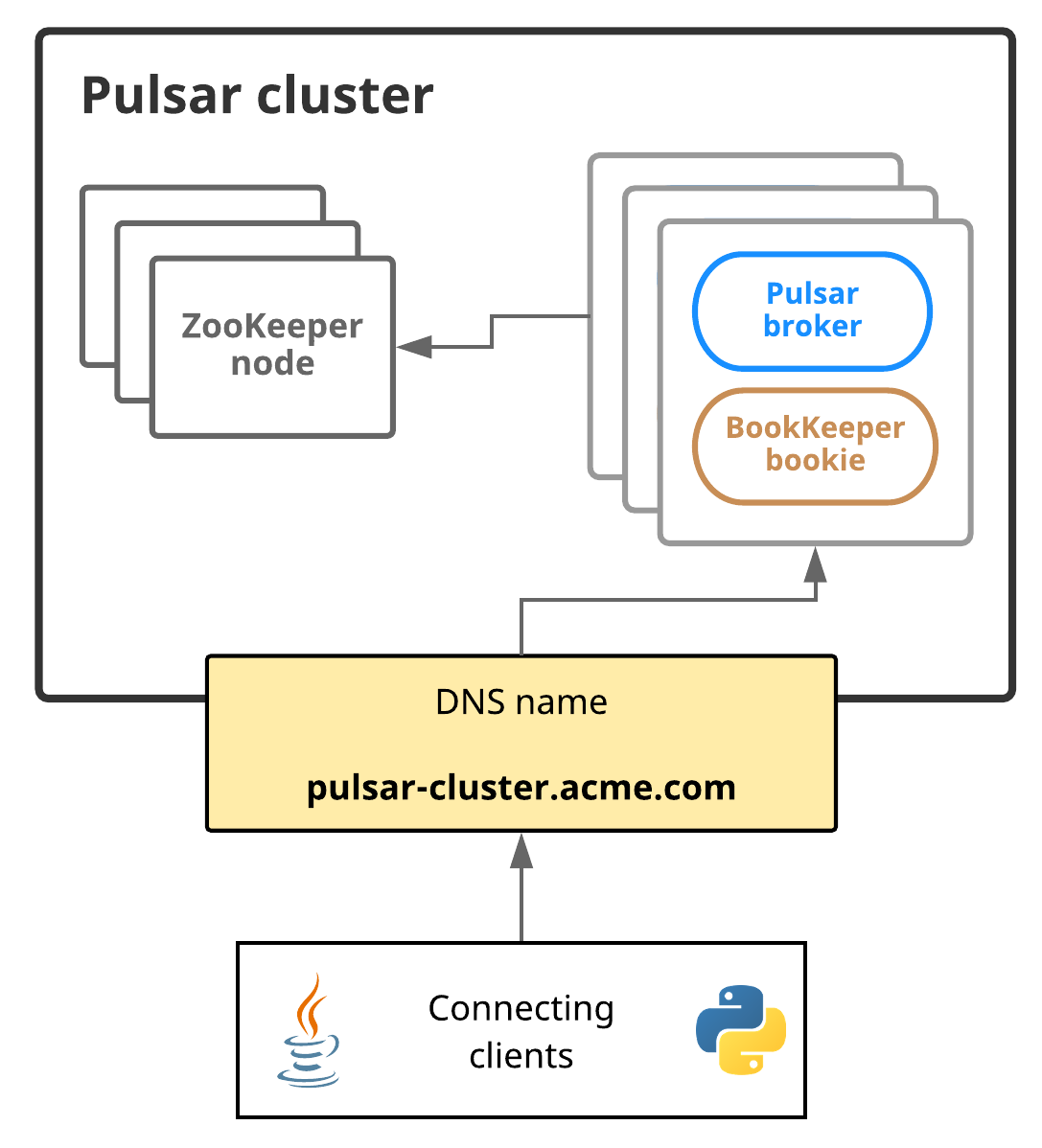 In this diagram, the Pulsar cluster is addressable via a single DNS name: pulsar-cluster.acme.com. A Python client, for example, could access this Pulsar cluster like this:

In Pulsar, each topic is handled by only one broker. Initial requests from a client to read, update or delete a topic are sent to a broker that may not be the topic owner. If the broker cannot handle the request for this topic, it redirects the request to the appropriate broker.