Skip to main content
🚀 Check out all the sessions in Pulsar Summit Asia 2022 on YouTube!
Version:
Next
Version: Next

Pulsar uses a custom binary protocol for communications between producers/consumers and brokers. This protocol is designed to support required features, such as acknowledgments and flow control, while ensuring maximum transport and implementation efficiency.

Broker entry metadata is stored alongside the message metadata as a serialized protobuf message. It is created by the broker when the message arrived at the broker and passed without changes to the consumer if configured.

If you want to use broker entry metadata for brokers, configure the brokerEntryMetadataInterceptors parameter in the broker.conf file.

If you want to use broker entry metadata for consumers:

Message metadata is stored alongside the application-specified payload as a serialized protobuf message. Metadata is created by the producer and passed without changes to the consumer.

Once the client gets confirmation of the producer creation, it can publish messages to the broker, referring to the producer ID negotiated before. 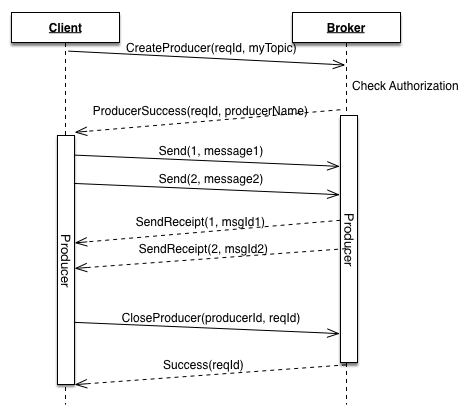 Before creating or connecting a producer, you need to perform topic lookup first.

Command Send is used to publish a new message within the context of an already existing producer. If a producer has not yet been created for the connection, the broker will terminate the connection. This command is used in a frame that includes command as well as message payload, for which the complete format is specified in the message commands section.

This command can be sent by either producer or broker. 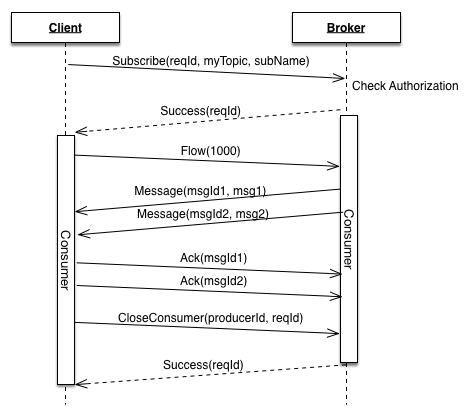 Before creating or connecting a consumer, you need to perform topic lookup first.

This command is used in a frame that includes the message payload as well, for which the complete format is specified in the message commands section.

An example of AckResponse with redirection:

This command can be sent by either producer or broker.

The protobuf object accepts a list of message IDs that the consumer wants to be redelivered. If the list is empty, the broker will redeliver all the pending messages.

This command is sent by the client to retrieve Subscriber and Consumer level stats from the broker.

This command is sent by the client to unsubscribe the consumer_id from the associated topic. 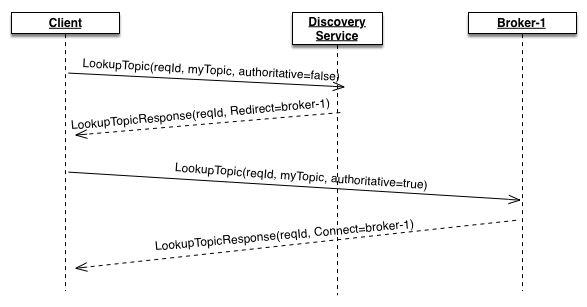 An example of response with successful lookup:

This is an example of lookup response with redirection:

The discovery of partitioned topics metadata works very similarly to the topic lookup. The client send a request to the service discovery address and the response will contain actual metadata.

An example of response with metadata: